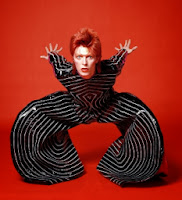 David Bowie has beat some of the biggest names in history, including members of the Royal family, to be crowned Best Dressed Briton by BBC History Magazine.

It's another feather in the cap of the 66 year old singer whose recent album, his first in over a decade, has been nominated for a Mercuary Award. And who was the subject of the fastest-selling V&A exhibition of all time.

"David Bowie has received many accolades in his glittering career, but surely none of them compare to being voted the best-dressed Briton of all time. Bowie had to overcome a king, two queens and a political heavyweight to triumph in our poll, and in doing so has struck a blow for 20th and 21st-century fashions" said BBC History Magazine editor, Rob Attar.

For a full list of the finalists, visit www.historyextra.com/bestdressedbriton